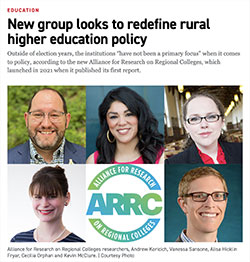 Five researchers met on Twitter in 2020 and came up with a goal: Define what it means to be a rural-serving college. Months later, they launched an advocacy and research organization that’s challenging Capitol Hill leaders to rethink how they evaluate and fund rural and regional colleges.

They want rural colleges to be front of mind year round — not just during campaign season — when lawmakers decide how much money to give institutions. Outside of election years, the institutions “have not been a primary focus” when it comes to policy, according to the new Alliance for Research on Regional Colleges, which launched in 2021 when it published its first report.

The Higher Education Act, for example, mentions development grants for rural-serving colleges, but it “still has no funding appropriated,” said Andrew Koricich, executive director of ARRC, which is based out of Appalachian State University in Boone, North Carolina.

Read the full article at Politico.