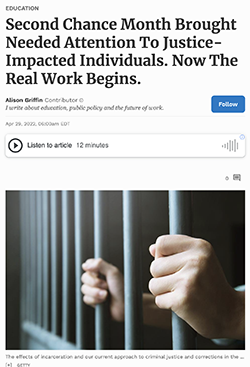 April is Second Chance month—a time when advocates for criminal justice reform, community-based organization leaders, and policymakers come together to elevate conversations about solutions for justice-impacted individuals. In recent years, there’s been a sea change on this issue—with the federal government only last year overturning a longstanding ban on access to Pell Grant funding for incarcerated individuals to pursue postsecondary education.

Across multiple administrations and both political parties, the federal government has been rethinking its approach to criminal justice. It’s an idea whose time has come—and not a moment too soon. The effects of incarceration and our current approach to criminal justice and corrections in the U.S. are staggering: every year more than 650,000 formerly incarcerated individuals enter the job market. A year after reentry, three-quarters of those individuals remain unemployed.

Read the full article at Forbes.com