Vera Helps Guide Postsecondary Education in Prison Programs on a Path to Pell for All | Ascendium Education Group, Inc. Skip to main content 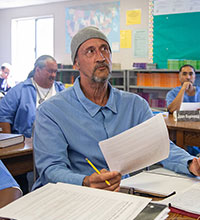 Ascendium's investment priority to scale proven, high-quality postsecondary education in prison models led us to support the Vera Institute of Justice in a two-year initiative, Unlocking the Promise of Pell for Students in Prison. As part of the effort, Vera produced First Class: Starting a Postsecondary Education Program in Prison, as well as instructional videos to guide incarcerated learners through completing the highly complicated Free Application for Federal Student Aid (FAFSA).

Since its founding in 1961, Vera has been at the forefront of making the criminal justice system more fair, equitable and just. For the past four years, Vera has served as a technical assistance provider for Second Chance Pell, a federal pilot program allowing the use of Pell Grants for learners who are incarcerated at participating prisons. Federal Student Aid announced an expansion of the pilot this summer, allowing up to 200 colleges and universities to participate, and institutions have until Oct. 28 to submit a letter of interest.

Ascendium connected with Margaret diZerega, who directs Vera's Center on Sentencing and Corrections, to get her thoughts on the recent expansion of Second Chance Pell, the permanent lifting of the Pell Grant ban for incarcerated learners in the 2023-24 school year, quality in prison education programs and more.

Why was it important to expand Second Chance Pell again?

The expansion will just help accelerate the overall implementation of Pell Grants for all. With every round of Second Chance Pell, there were more colleges that applied than were accepted, so we know there's  greater interest out there. With the knowledge that Pell reinstatement is now the new law of the land and not a pilot program, colleges that were contemplating it will be more interested because they can imagine building something for the long term. We're also hopeful that the eight states that don't yet have an in-state college in prison will have representation in this round as well.

Broadly speaking, what do we mean when we say we want quality in postsecondary education in prison programs?

We really want to see higher education in prison programs that are high quality and as comparable to the experience that somebody might have on a college campus as possible. We want them to be equitable and ensure that all students have opportunities to access those classrooms and pursue their credentials. And we want it to lead to a credential that students could then take to pursue a career that is meaningful to them. We're excited about the potential to really have quality higher education in prison at scale in a way that we haven't seen for a long time.

What were some of the biggest lessons learned for educational institutions in the early cohorts of Second Chance Pell?

One of the things that we see really successful programs do is have dedicated college staff for the students in prison. It sounds simple, but it really helps to have somebody who is regularly going to the facility who’s in communication with all of the facility staff, as well as all of the professors, and to be a touch point for students.  Those are the programs that are able to build up their program and have a lot of interest and demand from students.

What did corrections institutions learn in those same cohorts?

For corrections it's really important to be thinking about how students might move through their education, which could be GED through postsecondary, and then also thinking about how somebody moves through their education as they're moving down in custody level and ultimately back out into the community. Having staff involved in those conversations, from the security side of corrections as well as the education and program side, but then also in the different facilities so that everyone's  on the same page about the goals, how it works and what information can be shared with people who are interested in enrolling in classes.

What I’m hearing from corrections and colleges is they're just really eager to be teaching in person. They both want students to have that in-person classroom experience where you're debating with each other, asking questions and there's hands-on learning — all of those things. Another important one is making sure that students are getting good academic advising so that if they are not completing a degree while incarcerated, that they have a good understanding of how to go about that when they get home.

What do you think the landscape will look like in a few years, when all learners who are incarcerated can use Pell Grants to further their education?

Our vision and hope for this work is really that it is a strategy to reduce mass incarceration, that there are more people leaving prison with the skills and knowledge to pursue meaningful careers and be able to take care of themselves and their families. We know that a single degree can have such a positive ripple effect in their families and communities. I hope we could look back on this time and say that's when we really saw a big shift in far fewer people returning to the prison system.

We thank Vera for their great work and Margaret for making the time to speak with us. For more information on Ascendium’s strategy in this focus area, see our Expand Postsecondary Education in Prison page.

Trends We’re Watching in 2023, Promising IT Career Training Pathways for Learners and More

With 2022 in the rear view, Ascendium has kicked off the new year with optimism and excitement. We’ll continue to work closely with our grant partners and will be watching several postsecondary education trends in 2023. Future grant opportunities may be informed by the trends we see, especially if they connect to our goal of fostering upward mobility for learners from low-income backgrounds.