A Recommendation to ‘Reset,’ Not ‘Fix,’ Broken Transfer System 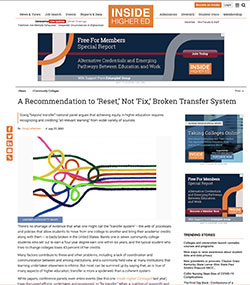 There's no shortage of evidence that what one might call the "transfer system" -- the web of processes and policies that allow students to move from one college to another and bring their academic credits along with them -- is badly broken in the United States. Barely one in seven community college students who set out to earn a four-year degree earn one within six years, and the typical student who tries to change colleges loses 43 percent of her credits.

Many factors contribute to these and other problems, including a lack of coordination and communication between and among institutions, and a commonly held view at many institutions that learning undertaken elsewhere is inferior. But most can be summed up by saying that, as is true of many aspects of higher education, transfer is more a spiderweb than a coherent system.

Read the full article at Inside Higher Ed.