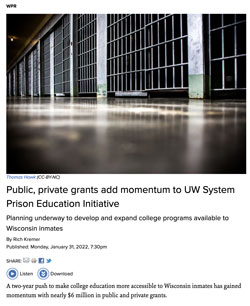 A two-year push to make college education more accessible to Wisconsin inmates has gained momentum with nearly $6 million in public and private grants. The funding will help matriculate inmates and "break the back of recidivism," Tommy Thompson, University of Wisconsin System interim president and former governor, said.

Thompson first announced his Prison Education Initiative in December 2020. The pitch was simple: build UW System degree programs at state prisons and ultimately turn one into an "educational institution." Thompson, who has said he regrets overseeing a large expansion of Wisconsin's prison system when he was governor in the 1990s, included the initiative in his first UW System budget proposal when he sought a $95.7 million increase in state funding for the state's campuses compared to the previous budget.

Lawmakers provided $8.25 million in additional general purpose revenue to system schools while lifting an eight-year freeze on resident undergraduate tuition increases. In November, Ascendium awarded a $150,000 grant toward the effort.