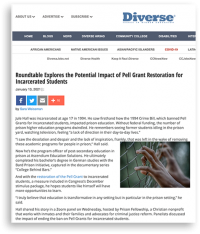 Jule Hall was incarcerated at age 17 in 1994. He saw firsthand how the 1994 Crime Bill, which banned Pell Grants for incarcerated students, impacted prison education. Without federal funding, the number of prison higher education programs dwindled. He remembers seeing former students idling in the prison yard, watching television, feeling “a lack of direction in their day-to-day lives.”

“I saw the desolation and despair and the lack of inspiration, frankly, that was left in the wake of removing these academic programs for people in prison,” Hall said.

Now he’s the program officer of post-secondary education in prison at Ascendium. He ultimately completed his bachelor’s degree in German studies with the Bard Prison Initiative, captured in the documentary series “College Behind Bars.”

And with the restoration of the Pell Grant to incarcerated students, a measure included in Congress’s December stimulus package, he hopes students like himself will have more opportunities to learn.

Read the full article at Diverse Issues in Higher Education.

Trends We’re Watching in 2023, Promising IT Career Training Pathways for Learners and More

With 2022 in the rear view, Ascendium has kicked off the new year with optimism and excitement. We’ll continue to work closely with our grant partners and will be watching several postsecondary education trends in 2023. Future grant opportunities may be informed by the trends we see, especially if they connect to our goal of fostering upward mobility for learners from low-income backgrounds.